FROM COLLEAGUES TO FRIENDS: THE POWER OF AEN NETWORKS & COLLABORATIONS

I have colleagues from different countries across Africa to bid with for a variety of projects just from that AEN membership.

Dr Julian Bagyendera became interested in the Africa Evidence Network (AEN) when she saw a call for abstracts on mapping the evidence landscape for countries. One of the things that has impacted her thinking on a personal level is hearing terminologies like ‘evidence mapping’ and ‘landscape mapping’. She says,

This call for abstracts came soon after a conference that she attended on evidence landscaping in different countries and she was intrigued enough to coral together a few colleagues to share ideas network. She had to learn to look at evidence differently. What helped her to have that comprehensive understanding to identify those who request for evidence, those who use the evidence and those who generate the evidence and reminds us that; The AEN presents a challenging way to think of evidence because sometimes we just auto work and don’t think about the evidence and how it can inform even the implementation at different levels.

The abstract was accepted and the AEN invited Dr. Bagyendera to attend the AEN conference and she has been attending going ever since. The Dr was still a member of numerous professional networks when she joined the AEN.

“There has not been a fundamental shift in how I do things, what the AEN has done is add great value to my work and most significant for me is being able to collaborate and bid together”
The AEN has widened her network to include colleagues from South Africa, Ethiopia, and Cameroon:

“So I have colleagues from different countries across Africa to bid with for a variety of projects just from that AEN membership”.

“When you are bidding for and assignment in another country. It helps when you know another person you can work with from a different country rather than all of you coming from Uganda for instance and you want to go and work in Cameroon. But if I have a fellow consultant in Cameroon and I bid with them, they understand the local situation and context, and that gives a niche when we are bidding”.

The group of AEN members working together has become so close that to increase collaboration and engagement they have formed a WhatsApp group. In this group they share professional information and updates on related assignments, attending conferences together, because there is a lot of experience sharing from different countries, they look at the evidence landscaping in different countries. 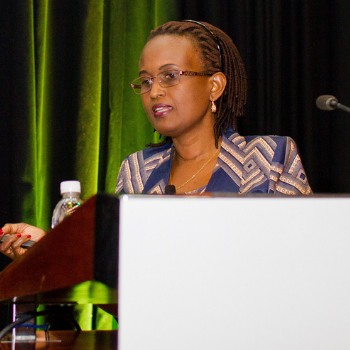 ~ Julian K, Bagyendera, executive director of Provide and Equip (P&E) Ltd, CEO of Molian Investments, Uganda
Back to story categories Back to Stories of Change
Previous Next