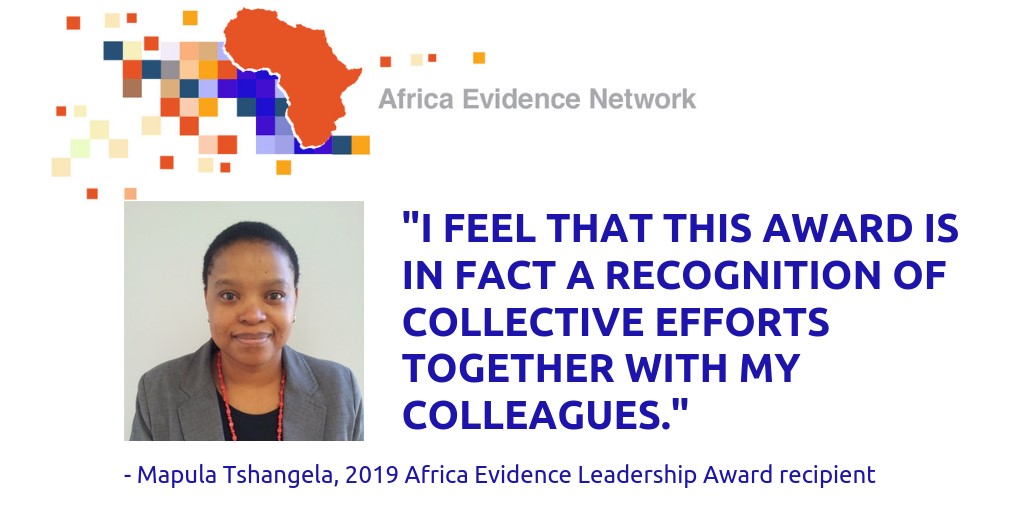 Mapula has been working to improve the use of evidence in South Africa’s Department of Environmental Affairs (DEA) since 2008. Her work seeks to strengthen the systems and processes that underpin evidence-use in government departments. She devised and championed initiatives to strengthen systems and processes for evidence-use, working on her own or using her considerable powers of persuasion to collect a group of like-minded colleagues to help implement and embed change. Mapula’s work was recognised by DEA as she was seconded to KwaZulu Natal to assist the provincial government on an environmental management function which included assisting that department to develop its own evidence strategy, before she returned to a position as the director of the climate change mitigation sector plan implementation. Here, Mapula is working hard to entrench the concept of implementation evidence. Without formal support for many years, Mapula has persistently and committedly championed the evidence agenda in South Africa for many years, eventually able to attract a group of like-minded colleagues who are now also scale-up and spearhead the use of evidence in the environment sector.

AEN: How did you feel and respond when you were told that you had received the award?

MT: Winning the Africa Evidence Leadership Award was honestly not something I expected as I am aware there are many other people doing a great job in the evidence work in various sectors and countries, so I truly do feel honoured and appreciate the recognition. I know we still have to do more and continue to explore possibilities whenever opportunities emerge with various other stakeholders. I feel that this award is in fact a recognition of collective efforts together with my colleagues within the Department of Environmental Affairs (DEA) (especially Kiruben Naicker and Wadzi Mandivenyi from biodiversity, Zama Nkuna and Godfrey Nyakulalini from sustainable development – they enabled the demonstration of evidence-informed policy-making institutionalisation in the environment sector) and among others at the Department of Science and Technology (Imraan Patel, Henry Roman, Leluma Matooane and Nonhlanhla Mkhize), the Department of Planning, Monitoring and Evaluation (Harsha Dayal, and in his previous role Ian Goldman), the Overseas Development Institute (Louise Shaxson and Ajoy Datta), the Council for Scientific and Industrial Research (Linda Godfrey and Nikki Funke), and the United Nations Environmental Programme (Cecilia Njenga) for being with DEA throughout the nonlinear process over the years.

AEN: What role do you think the Africa Evidence Leadership Award plays in the evidence-production and -use ecosystem in Africa?

MT: There is an element of awareness and a knowledge-sharing platform about what people from different sectors and countries are doing and how they go about it. It also does give a good pressure to do more.

AEN: Name three ways you believe that you or your work will benefit from receiving the award? Why are these three things important to your work?

MT: I believe the award will give me opportunities for scaling up the efforts to encourage evidence-use in decision-making, especially on promoting evidence relevant for the implementation of policy. This award might also contribute to strengthening the co-production approach to policy and evidence. And finally, I think that the award has potential to build awareness and knowledge exchange, especially in the African continent at large.

AEN: What is the one thing that you are most looking forward to about attending EVIDENCE 2020?

MT: I am excited to learn more about what other people in Africa are doing to support evidence-informed decision-making, and I’m also looking forward to also establishing new partnerships specifically for the implementation of evidence.

AEN: What one piece of advice do you have for new colleagues coming into the evidence-informed decision-making space in Africa?

MT: Supporting evidence-informed decision-making is a long-term and often complex non-linear process. Establishing and sustaining partnerships for co-creation and co-learning is vital as well as support from the leadership.