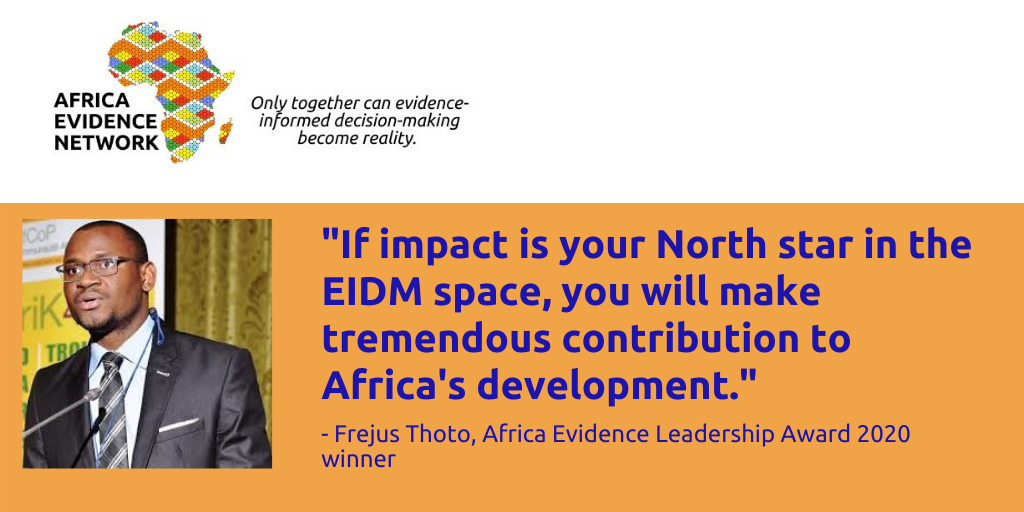 Since 2009, Frejus Thoto has been the Executive Director of Actions pour l’Environnement et le Développement Durable (ACED).  ACED works to build connections between evidence, policies and action in the food and nutrition security sector ultimately to improve the livelihoods of vulnerable populations in Benin. To achieve the greatest impact from its interventions, ACED adopts a non-linear, three-pronged and evidence-driven approach, combining research, action, and policy. The first pillar involves the generation of robust evidence to enhance understanding of the challenges faced by Benin’s agricultural vulnerable communities. Second, research knowledge products are reformulated into policy recommendations and used to inform practitioners and decision-makers in the areas of agriculture, rural development, and environmental preservation. Moreover, the organization goes beyond research and advocacy by collaborating with local NGOs and other agricultural stakeholders in Benin to implement evidence-based solutions in the field.

In 2018, Frejus has championed the launch of the Evidence Policy Action (EPA) Network as a response to the lack of a functional platform that connects the evidence-production systems and the policy/practitioner community in Benin. The Network quickly becomes the largest national platform that brings together evidence generators, policy-makers, and practitioners.

AEN: How did you feel and respond when you were told that you had received the award?

FT: I was very excited to hear that I won the Africa Evidence Leadership Award. I am very grateful for ACED, the organisation I work for because it has created the institutional environment that is instrumental in applying my ideas about advancing evidence use in the food and nutrition security sector. I am very grateful to all my colleagues as this Award is to celebrate the work ACED has been doing in the past 10 years.

AEN: What role do you think the Africa Evidence Leadership Award plays in the evidence-production and evidence-use ecosystem in Africa?

FT: By celebrating those who are advancing the evidence-informed decision-making (EIDM) field, the Africa Evidence Leadership Award creates incentives for the different stakeholders to do more to help decision-makers and practitioners in using evidence. As such, the Award contributes to greater and faster adoption of evidence-use on the continent as the awardees and their organisations will work more towards that objective.

AEN: Name three ways you believe that you or your work will benefit from receiving the award? Why are these three things important to your work?

FT: First, this award celebrates my personal commitment to EIDM in Africa. Thus, it will help me continue advocating and working for greater institutionalisation of evidence use in Africa. At the organisational level, the award will improve the visibility of ACED. Through this award, more people will learn about how we have been working to connect evidence to policy and action to create a lasting impact on the food and nutrition security sector. We look forward to creating more and better partnerships across the world to advance our mission.

AEN: What is the one thing that you are most looking forward to about attending EVIDENCE 2020?

FT: I am so sad that EVIDENCE 2020 will not happen in person because of the current crisis but I am sure the online experience will also create a nice opportunity for learning. I look forward to learning from the brilliant EIDM community in Africa and I am excited to share our vision of EIDM at ACED that combines Evidence, Policy, and Action.

AEN: What one piece of advice do you have for new colleagues coming into the evidence-informed decision-making space in Africa?

FT: I would tell them that they have chosen a field of great importance for Africa’s development and that they are well-positioned to support Africa’s transformation. I would recommend that they make sure they go beyond evidence generation and sharing to facilitate its use in an impactful way. It is relevant to generate evidence and share but the critical factor of success is when this evidence is put into use to address concrete development challenges in sectors such as education, health, agriculture, or transport. If impact is your north star in the EIDM space, you will make a tremendous contribution to Africa’s development.