Previously I was working in the background but with the announcement of the [AELA] winner I’ve got more than 500 followers which I think are the networks of the AEN. Most of the followers are related to the evidence space. I’ve got serious people that are following me from the UK, Europe alike and the US and within the African continent such as Ghana, Uganda, Malawi, Zimbabwe and South Africa!

For Mapula Tshangela the AEN is “a homely network”. She has been a member of the network since 2014 when the South African Department for Environmental Affairs was part of the VakaYiko consortium in the DFID-funded programme to Build Capacity for the Use of Research Evidence (BCURE). Currently a director at the department Mapula appreciates the connectivity and openness of the network in terms of the diversity of membership:

"It is a very unique [network] and it’s open to even accommodating government officials such as ourselves… You come together and you are able to share. And our practitioner knowledge is also valued in that network and that is very important. Sometimes when these networks become too academic it is easy for government officials to just withdraw."

Mapula’s work on evidence-informed decision-making (EIDM) in government was recognized when she became the 2019 winner of the Africa Evidence Leadership Award (AELA). Of course the nomination came as she has been collaborating with and supported by many people throughout the years, whom she remains appreciative of. Winning the AELA was never something she was planning for and it has changed two things for her. First, it has raised her profile and substantially increased her social media following:
"Twitter is the focus of the whole thing. I’ve got so many followers on Twitter and I think half of them are evidence people."
Although it has been a “humbling” experience to receive the award, and something that she had not expected, she also feels that winning has increased the pressure on her to do even more in the EIDM space: "I think, what it has done is it has put more pressure on me to say ‘what is next’. Although in the past I didn’t have the bar or standard that I was measured against, now I am under pressure to say OK so going forward how does one make an impact? So I think there is that contradiction that I am struggling with. Now that the thing is being recognized, what is the next step and what will it look like, and how does one go about it. It’s a positive pressure."

When she won the award her work focused on policy and research, specifically the policy cycle and getting evidence into policy formulation and decision-making. Since then she has changed focus to climate change policy implementation and is now challenged to focus on what she sees as the neglected field of implementation evidence. She is excited to learn more about this area, to connect with others in the AEN doing the same work, and to continue to make a positive impact working with others. 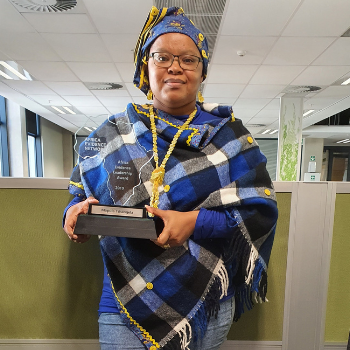 ~ Mapula Tshangela, director at Department of Environment, Forestry and Fisheries, South Africa
Back to story categories Back to Stories of Change
Previous Next