I didn’t have a sense of how many more institutions on the continent are talking about EIDM. When I joined AEN I was like ‘wow’ that there are so many voices. Not that we shouldn’t continue appreciating the voices in the rest of the world, but knowing there is so much more expertise on the continent, that I can definitely link to my involvement with the AEN.

Diana Warira describes EVIDENCE 2018 as “one of the big highlights for me [of being a member of the AEN]”. Employed in Kenya at the African Institute for Development Policy (AFIDEP) at the time, she was awarded a bursary to attend the conference and present on work that she had done earlier that year while holding a scholarship at The Woodrow Wilson International Centre for Scholars. EVIDENCE 2018 had many highlights, but one of the things that changed Diana’s perspective was the 3ie workshop on impact tracing. She describes it as follows:

"I remember there was a certain workshop that I attended by 3ie on impact tracing. How do you trace the impact of your evidence-to-policy work? For me that was huge. And I thought it was something that more and more people need to tap into. We are doing so much in the- evidence-to-policy ecosystem so to speak. How do you really measure impact? It was very, very enriching... It doesn’t end with communicating evidence, but how to go the extra mile and think about the long-term goals, the outcome and the impact. [As a development communications specialist] it has shaped my thinking through those extra steps."

Apart from influencing her thinking around impact tracing, the AEN has also influenced Diana’s appreciation for evidence as referring to a broad spectrum of outputs:

"Before I joined the AEN and got exposed to a lot of these conversations I only thought of evidence as research, but you learn there are many more types of evidence and factors that are working in these contexts. So [the AEN is] definitely influencing how I look at the field."
Adding to Diana’s awareness of the range of voices on the African continent in the field of evidence-informed decision-making is another way in which the AEN has changed Diana’s perspective on the field:

"I didn’t have a sense of how many more institutions on the continent are talking about EIDM. When I joined AEN I was like ‘wow’ that there are so many voices. Not that we shouldn’t continue appreciating the voices in the rest of the world, but knowing there is so much more expertise on the continent, that I can definitely link to my involvement with the AEN."

Diana is actively adding her own voice to the mix:

"The EVIDENCE 2018 was a great platform for me. It has also given me a lot of confidence as well to keep talking about some of these things… Last year the AEN ran a series – Emerging EIDM Leaders – and I did a short video with the team on why I fell in love with EIDM. That kind of participation and being able to put out my voice and be part of the conversation, [as well as] building these conversations about the EIDM field in Africa and strengthening the African voice has been really an amazing opportunity as a member of the AEN."

Diana is not only growing from strength-to-strength, but is also taking the AEN with her into the future. She has recently transitioned from working as an independent communications consultant to being the Policy Manager, Gender and Economic Agency Initiative (J-PAL/IPA)) in Eastern Africa.

"I remember asking the team that was interviewing me whether they had interactions with AEN and they told me ‘no’. For me that was an opportunity to highlight that anyone working in the evidence space would benefit massively from tapping into the AEN network. I will take the connections that I have in the AEN into my new role. And also seeing how the work feeds into the AEN mandate… It [the AEN] is such an amazing pool of expertise that will definitely benefit my new role, definitely, I’m saying that with a big smile." 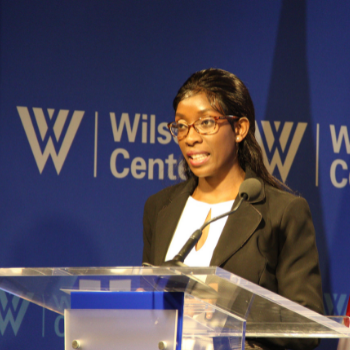 ~ Diana Warira, policy manager, Gender and Economic Agency Initiative J-PAL/IPA Kenya
Back to story categories Back to Stories of Change
Previous Next