A critical component of enhancing the use of evidence for decision making was the involvement of partners. Each time new evidence emerged partners were invited to a dissemination event.

Research indicates that learning begins even before birth and that the most important period for giving children a good foundation for learning is immediately after birth. A ‘Political Economy Analysis (PEA)’ by Save the Children conducted in 2013/14 indicated that there was no effective early childhood education curriculum in Rwanda. Furthermore, while there was an early childhood education policy in place it was not comprehensive and did not include an emphasis on cognitive development for children under three years of age. There was limited understanding about the importance of early learning and literacy for children 0-9 years among stakeholders including parents, policymakers and technocrats. An additional gap that surfaced was related to research and implementation literacy and early learning programs in Rwanda especially for children under 6 years. There was limited data on what works in ECD, how it works and how much it would cost for the government to adopt such interventions. These and other results from the PEA influenced a robust research and advocacy agenda to target different gaps in the system, including stakeholder behaviour, policy and implementation gaps.

In order to support early learning policy and implementation in Rwanda and address the above-mentioned challenges, Save the Children implemented the ‘Advancing the Right to Read’ program from 2013 to 2018. It aimed at ensuring that children (0-9yrs) have the support to exercise their right to read. The program was designed to also reflect that the best investment in supporting reading and learning foundation, should be in the first nine years of life so that children can exit the third grade of primary school with the necessary skills to be able to read to learn.

The program was complemented by 3 main research studies whose results were used to influence both policy and implementation of early learning and development programs in Rwanda. Results demonstrated that

a) Children were struggling in literacy and maths skills pre-intervention and made significant gains post-intervention using Save the Children’s Emergent Literacy and Maths Curriculum. This suggested that there was a need for a structured pre-primary curriculum that emphasized foundational skills for pre-school children.

b) Children in the parenting only group had almost caught up, in terms of school readiness with those children in the formal schools. This suggested that investment in parenting education - where parents are trained on simple activities that can support reading and maths at home - are almost as effective as a structured pre-school program. This was particularly relevant for those children who are not yet able to access the formal system.

c) Children aged 0-3 participating in the holistic parenting education program showed significant gains in areas of problem-solving and early communication (which are predictive of future learning) than those in the control group. This emphasised the urgent need to start early learning and development interventions from birth.

The evidence from this program has influenced the government of Rwanda’s pre-primary curriculum. It is estimated that up to 80% of the changes have been influenced by Save the Children’s Emergent Literacy and Maths (ELM)/ Ready to Learn approach. The ECD policy was also revised in 2016 to comprehensively cover the 0-3 age ranged and to place emphasis on cognitive development. Save the Children in collaboration with other partners also successfully advocated for increased ECE funding including funding for teacher salaries and resources for pre-primary classrooms such as storybooks for promoting emergent literacy.

Evidence-Informed decision-making has also become intrinsic to the internal culture of Save the Children. Reflections and evaluations have led to program and practice improvements, adjustments to the teacher-training approach and adaptations to the parenting education approach.

A critical component of enhancing the use of evidence for decision making was the involvement of partners. Each time new evidence emerged partners were invited to a dissemination event. This permitted collective reflection and was one of the most powerful approaches for ensuring a feeling of joint ownership of the evidence was created and policy action and advocacy points included partner voices.

These relationships have also influenced Save the Children’s research priorities and have contributed to demand-led research that responds to government priorities. The approach has led to the publication of academic papers that demonstrate how to encourage system change using evidence and with a collaborative effort with partners.

Caroline Dusabe is the Africa, Early Childhood Development Senior Specialist at Save the Children. She provides ECCD technical support to multiple countries in Africa and represents Save the Children on the African Union CESA Cluster for ECED. 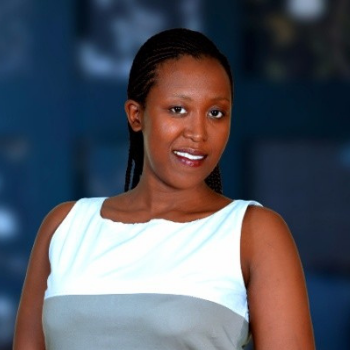 ~ Caroline Dusabe, Africa early childhood development senior specialist at Save the Children International
Back to story categories Back to Evidence Matters
Previous Next