USING LOCAL INDIGENOUS KNOWLEDGE AND PRACTICES FOR CLIMATE ADAPTATION DECISIONS: FROM THE LOCAL TO GLOBAL

Eric is an Environment, social and Governance researcher and is the founded of the Action Group on Governance and Environmental Management (AGGEM). His research area and projects are focused on promoting concerted and actions for wellbeing and resilience.

The major source of survival in Mankon, an agrarian village in the North-Western Highlands of Cameroon, is subsistence farming. The success of this sector is directly linked to how much people live in harmony with the environment. Unfortunately, with the rapid changes in the social, environmental and climatic conditions and influence of external forces, this harmony is continuously becoming threatened. Furthermore, responses to address these pressures from local and national decision-makers have been slow.

Mankon, like most agrarian communities, has historically developed and used Local Indigenous Knowledge and Practices (LIKP) for the sustainable management of natural resources and to enhance their wellbeing. The LIKP has been used in pest control, healthcare, soil enrichment, erosion control, species selection and conservation, development of early warning systems, and to build resilience against negative environmental changes. This communally owned, locally based and participatory knowledge is transferred from one generation to another through a process of mutual and collective learning. The local ownership and relevance of LIKP make it critical for climate change adaptation. Unfortunately, recognition of this contribution to wider policy-making on climate change adaptation is low.

The Action Group on Governance and Environmental Management (AGGEM) has focused attention on working with communities to generate and synthesize data that demonstrates communities as key to overcoming the damaging effects of climate change. This work entailed directly engaging with agrarian communities who are both drivers of climate change and actors keen on finding solutions to the problem to identify, document and make their LIKP related to climate change adaptation and mitigation accessible beyond the community level. While the initial focus was on the Western Highland of Cameroon, AGGEM has collaborated with counterparts locally and in other parts of Africa which has led to the establishment of a Community of Practice (CoP) on LIKPs. Through this collaborative effort AGGEM and counterparts at the Zambian College of Agriculture (ZCA) and the Tanzania Meteorological Agency (TMA) have subsequently harnessed, documented and compared LIKPS of Agrarian Communities in the different countries.

This work has continued to bring evidence of LIKP related to climate change mitigation to the fore amongst decision-makers. This has been through the presentation of this evidence in major global gatherings of decision-makers in the climate policy spectrum. One such example includes the Transformations 2019 Conference (Santiago, Chile from 16-18 October 2019) which brought researchers and practitioners from less and more developed contexts to promote reciprocal learning to support transformative changes for addressing climate change and other contemporary societal and environmental challenges. At the Adaptation Futures 2020 Conference - the flagship event of the global adaptation spectrum and part of the World Adaptation Science Program - facilitated dialogues towards action-oriented solutions from a diverse range of stakeholders.

At the national level, AGGEM engaged in policy advocacy targeting decentralised local councils using evidence on LIKP. This has resulted in the use of LIKP that was generated using protocols developed by communities and western knowledge generated using scientific protocols for climate decision making by 10 local councils in the Western Highlands of Cameroon.

The successful use of this hybrid decision-making approach in response to climate change vulnerabilities is positioning communities as co-producers of solutions to the climate change phenomenon using evidence developed organically. 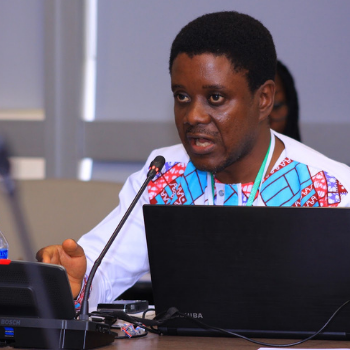 ~ Eric Ngang, researcher and environmentalist, Cameroon
Back to story categories Back to Evidence Matters
Previous Next