AS THE BLINKERS OPEN

“Sometimes we struggle through the confines of our work and wear blinkers and are not aware that there are opportunities that exist in Africa and beyond without knowing that there are people who exist who can assist us in our work. The AEN gives us this opportunity”.

Promise Ndoku joined the Africa Centre for Evidence (ACE) in 2017 as a researcher and was involved in different projects that ACE is doing in the African continent and beyond. Captivated by the vision of ACE, he became a member of the AEN three years ago. Promise sees the role of the AEN as that of networking, allowing one to be part of a larger group of people who are driven by the same interests and vision.

Promise`s naturally calm and almost measured demeanour transforms into this animated and earnest personality as he uses words like ‘awesome’, ‘great’, and ‘amazing’ when he shares his experiences with the two AEN conferences he has attended since he became staff at ACE and a member of the AEN. He says “Sometimes we struggle through the confines of our work and wear blinkers and are not aware that there are opportunities that exist in Africa and beyond without knowing that there are people who exist who can assist us in our work. The AEN gives us this opportunity”.

His favourite aspect of the AEN is obviously the Conferences as he keeps going back to their importance and the impact that they have had in his life. He highlights the fact that key players in the EIDM space in the African continent and around the globe come to attend these conference. One then gets to engage with them on both a personal and professional level. “You get to meet new people that you would never have had a chance to meet because emails are not nearly enough. What is great is if you have a specific question, you can ask the AEN secretariat to highlight it in the conference common spaces and you have an opportunity to get in touch with members who work in the same space to collaborate on projects. Moreover, if you want to delve into new waters by yourself, the AEN allows you to do that as well”.

Nothing can replace the face to face aspect of these conferences in his opinion. He narrates how happy he was capturing more than 20 personal experiences on the AEN and how it has influenced member`s work. He says believes that one can tell from someone’s responses how genuine they really are. During his stint in capturing impacts stories at the conference, he come across personal accounts of people, their gratitude, what the AEN has inspired them to do and what doors opened partly due to the Network.

He finally says “It is one thing to have a vision as a Network and quite another to see it happen. To have someone tell you that because of the AEN, he was able to find partners that he could actually collaborate with other AEN members and which culminated and a publication of an article. This story strengthened my belief in the AEN”, “The reality of the African context is that as much as we have all this technology, we thrive with face-to-face encounters” says Tshepo. 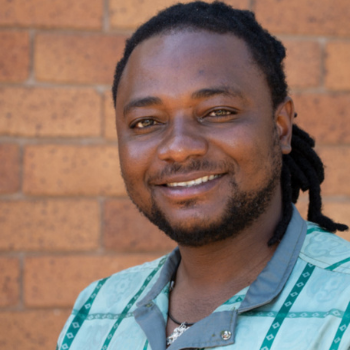 ~ Promise Nduku, researcher at Africa Centre for Evidence (ACE)
Back to story categories Back to Evidence Matters
Previous Next