INSTITUTIONAL CHANGE GOES BEYOND TRAINING AND MENTORSHIP: EXPERIENCES BETWEEN AFIDEP AND GOVERNMENT OFFICIALS

Strengthening individual and institutional capacity to enable evidence use in decision-making
In response to weak individual and organisational capacity for evidence-informed decision-making (EIDM), the African Institute for Development and Policy (AFIDEP) has focused a large proportion of its efforts in overcoming these challenges. Since 2013, AFIDEP has implemented various projects in multiple African countries.

Some of these include:
• Training and mentorship of technical staff in government agencies. This has resulted in demonstrable technical capacity in EIDM among trained technocrats, and increased awareness and actions by government officials to strengthen institutional capacity to support EIDM (e.g., allocation of new resources to research departments as seen in the Kenya MoH and Parliament, and Malawi Parliament). It has also produced evidence champions in government agencies who have continued to promote, and support evidence use in their divisions/departments. While mentorship models have been largely effective, there have been challenges whereby some of the trained technocrats failed to complete their mentorship programmes, leaving the organisation unable to assess whether they can apply the skills acquired from the training or not.

• Development of EIDM guidelines for ministries of health (MoH) and parliaments in Kenya and Malawi. The guidelines took a very long time to develop as we adopted a participatory approach with the two institutions. As such, their impact was not captured by the formal evaluations conducted for the project that supported their development because they were adopted right at the end of the project. However, we have continued working with these institutions in other projects and as such have continued to learn about how the guidelines are being used. In the parliaments, the guidelines are well known by the research staff for whom they are targeted, and staff in both countries have indicated that they refer to these whenever preparing background papers or briefs for parliamentary committees. In the MoHs, the guidelines have not been widely disseminated, and so these are mostly being used by the staff in the Research departments and staff whom we have trained in EIDM who are aware of the guidelines. The lack of wide dissemination of the guidelines in the MoHs have partly hampered their use by more technical staff in these institutions.

• Producing evidence use tools for parliaments such as a budget analysis manual, legislative research guidelines, etc. These have been developed in the past year for the Malawi parliament (late 2019) and so we are not able to comment on their impact just yet. However, given that both tools were developed following requests by the parliament, it is believed that these are responding to real needs of parliamentary staff in conducting budget analysis and legislative research.

• Advocacy with high-level officials This has resulted in increased prioritisation of the need to strengthen evidence or knowledge structures within ministries or agencies through new resource allocations. However, bringing institutional changes need a lot more investments over longer periods of time which is often hindered by limited funding and low budgets resulting in initiatives ending without the anticipated institutional capacity being realised.

AFIDEP uses a comprehensive and in-built M&E process across the interventions. Some projects have also benefited from external evaluations.

It is important to embed capacity development initiatives in existing structures within ministries or agencies as this increases the chances that the capacities developed will actually benefit the ministry or the agency, and that the initiatives could continue beyond the life of the project. It is also important to sustain high-level engagement with leaders in the government ministry or agency to ensure sustained commitment to the implementation of the initiative. Collaborative design and implementation of interventions with the beneficiary government agencies ensures ownership and responsiveness of interventions. Finally, a comprehensive M&E approach ensures that organisations improve their effectiveness through continued learning.

Capacity development for increased use of evidence remains a central component of AFIDEP’s work, and so there will be a continuation in designing and implementing innovative initiatives to this end. The current and future interventions for the organisation have taken on board/will take on board lessons from past projects. For instance, there are two current projects that have prioritised institutional capacity development given the lessons learned from previous interventions on the centrality of this in nurturing and sustaining an EIDM culture. 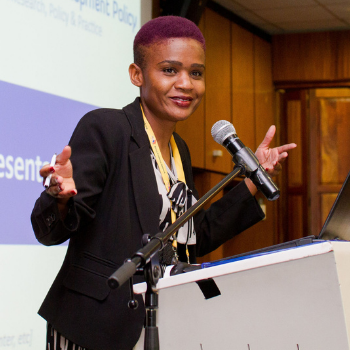 ~ Rose Oronje, development policy and communications specialist at AFIDEP
Back to story categories Back to Evidence Matters
Previous Next