AFRICA HAS ITS VERY OWN FLAVOUR

“I always thought that relationships and learning from other people is important. That is partly what influences me. It influenced why I helped with the network at the initial stages and why I helped to grow it. Through the network, I have met and have had a privilege of being involved with really interesting people across the continent. Much more than I ever thought I would”. Prof Ruth Stewart speaking on the ‘African flavour’ of the EIDM through the AEN lens.

Between 2010 and 2012 Professor Ruth Stewart and Dr. Carina van Rooyen collaborated on a couple of systematic reviews on microfinance while one sat in London and the other in South Africa. It was during this time that they decided to attend a conference in Bangladesh and though both did not meet the criteria, they begged to be allowed to attend. When they got there they realised there were actually 23 African professionals attending who also had to beg entrance. All of them with a keen interest in Evidence Informed Decision Making and all wanting to start the same in Africa.

The 23 African delegates decided to keep in touch after the conference, and would share an occasional email that would keep each other informed of what was happening in the field. Prof Stewart volunteered to put together the email and so became the de-facto coordinator of this informal group who called themselves ‘The Africa Evidence Network’. The AEN was born of this agreement from the 23 and has grown and evolved into the strong network of 3000 it is today.

As she started sharing information and working with people in the network she realized that sometimes people almost present this (EIDM) as an approach and an interest that has come from the UK. For example where we know a lot of the health work has been done and has been translated or adapted for work here in Africa; Prof Stewart is finding that the longer she works and engages with different people on the network the more she learns that some of the ‘stuff’ has been happening here long before the UK as far as she can see. It is much more home-grown and has its own flavour and expertise as well as its own drivers. She calls it ‘An African Flavour’ and says “So sometimes now I increasingly get involved in trying to highlight that and highlight the expertise that is happening here because it’s amazing and people don’t know that”

Prof Stewart believes the network and working on EIDM with her African colleagues has had quite a lot of influence in many ways, and comments that with the growth of the AEN numbers came more confidence to speak bravely on the continents issues. She also reflects that the AEN has made more concrete some of the things that she have always believed in and thought were probably true and says “I grew up in Malawi and I’ve always felt, having then lived in the UK and then come back to South Africa that there is expertise in Africa that people are just missing. The network has reassured me and made more concrete this idea that actually Africa has its own voice, its own experts, its own varieties and its own complexities. Africa not just a recipient of somebody else’s thinking and all of those things are very real in the network”.

Moreover, the AEN has given her, and she acknowledges that it is partly due to being the head of the network; a greater voice and has empowered her to be able to raise some of those things. But more than just her as an individual, the AEN has given the same stronger voice to some of the members of the network as well. “You have a sense that there is a community behind you when you say things because it is a kind of collective” She also feels that she has become a much better researcher and is getting better at being able to communicate, and got better at learning and engaging with a whole range of people.

Finally Prof says “I aspire to facilitating other people to have louder voices, we have a common goal (with AEN partners) and that is to build bridges (for Africa Evidence) to be heard through our partners voices as well and through just mine. I like to do connections and relationships”. And her favourite aspect of the network is “… talking to people face to face. So it’s nice to be able to skype somebody and being able to chat on email. I enjoy reading the newsletter, I learn about what else is happening for other people etc. but what I really enjoy is when I can sit down and talk to other people. For me that is something I can’t quite replace” 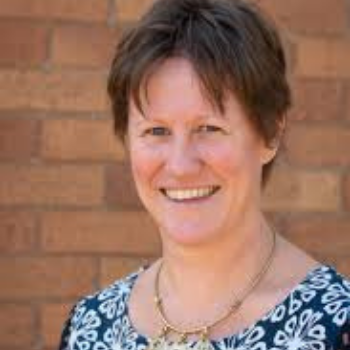 ~ Ruth Stewart, director at Africa Centre for Evidence (ACE) and chairperson of the Africa Evidence Network (AEN)
Back to story categories Back to Evidence Matters
Previous Next